﻿"The lure of aviation and the excitement it brings is enough of a muse."


Below are a collection of previously published stories and features from over the years. From topics like aircraft gone missing and drug smuggling to activism and specific aircraft features, I've tried to capture the adventure and excitement that aviation brings to so many individuals throughout the world. Some of these stories were published years ago in PilotMag, an adventure magazine for general aviation and others are fresh for the world to see. Enjoy!

SHOT DOWN OVER THE STRAITS OF FLORIDA - Activism comes with a price. A self-sacrificing effort often synonymous with a protest or dissent.  One individual, Jose Basulto, took a stand against human suffering and used his airplane as a platform. A movement of opposition and revolution can have tragic consequences, but at what price will someone intentionally attempt to bring social and political change against an adversary of monumental proportion.

“They harassed our Air Force, violated our airspace, dropped leaflets on our capital and engaged in other constant acts of provocation.  On July 13th, they dropped leaflets on Havana…In fact people watched from Malecon as MiGs made warning passes against their planes. People were criticizing the Cuban Air Force. We reported each and every violation to the United States in a diplomatic process. We warned U.S. officials time and again. We had been patient, but there are limits.”,  Fidel Castro said in an interview conducted by Reginald Black, chairman of Time, Inc. along with Miami Bureau Chief Cathy Booth, and Joelle Attinger, Time’s chief of correspondents justifying  the shooting down of two, American civilian aircraft on the afternoon of February, 26th, 1996.

It was July, 21 1991 when Alfredo Sanchez, a volunteer pilot for Brothers to the Rescue, a pro-democracy, humanitarian organization who’s mission is to promote and support efforts of the Cuban people to free themselves from dictatorship through the use of active nonviolence, took off from the Tamiami Airport in his Cessna 310 with 4 passengers onboard. His second of hundreds of rescue missions in the 90 miles stretch of the Florida Straits, Sanchez was accompanied by three other Cessna aircraft. The organization orchestrates hundreds of missions rescuing thousands of Cuban refugees fleeing communist rule on homemade, dilapidated rafts in a stretch of sea that some called “black” due to the hardship of its crossing to the Florida coast into the United States. These four aircraft were serving as “spotters” that day enabling search and rescue of rafters in need of support. 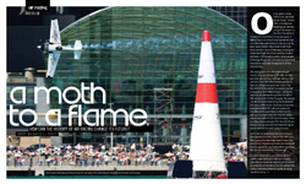 A HISTORY WITH A BRIGHT FUTURE - Sports fans are easily distracted come Sunday by these gladiatorial events. They are like moths to a flame gazing into their magic boxes to see the upper shelf score of the soccer match or Roger Federer crushing yet another opponent on the grass at Wimbledon or the clay at Roland Garros. However, sports fans are missing out. They are missing out on something that was conceived exactly 100 years ago.

It’s odd to think how a sport with break-neck speeds, steep climbs and dives, G-force loads, noise that punctuates excitement and has existed since the turn of the century has not captured the Sunday, armchair-quarterback quietly escaping household chores.

As the industry ponders the future of general and business aviation and the timeliness of its recovery, the answer just may lie in its own history.

In 1920, publisher Ralph Pulitzer sponsored the Pulitzer Trophy Race for military airplanes at Roosevelt Field on Long Island. As a way to publicize his newspaper and promote aviation, Pulitzer birthed the National Air Races that included pylon and cross-country races that taking place from 1920 to 1949. Like their modern day successors, these races spurned the advancement of aerospace and aviation during this period and made an indelible impression on its future. Even before Pulitzer’s self promoting venture, air racing was on the minds of the French who hosted to the first ever air race on May 23rd, 1909. The Prix de Lagatinere held at an airport, Port-Aviation, south of Paris. Four pilots entered the race. Unfortunately, only two actually started and nobody officially completed the full race distance. Leon Delagrange covered over 5 laps of the 1.2 kilometer course, only half the total distance. He was crowned the victor.

Other names like Louis Bleriot and Glenn Curtiss dominated the National Air Races in Cleveland in events like the Thompson Trophy Race. The first-of its kind, this closed-circuit race was designed for aviators to battle it out around a series of fixed pylons. The Thompson Trophy was sponsored by a prominent Cleveland manufacturer and the event provided an excitement that eclipsed many contemporary barnstorming events. It was the climatic, final race of the National Air Race series covering a course that was 10-miles long with 50-foot high pylons. Aircraft averaged over 200 miles per hour and created a spectator sport of the highest order. Prize money was no joke either earning winning pilots well over $5,000. In 1930, that was quite a bit of spending cash.

Instead of taking off at timed intervals, race organizers felt to create a race with more spectacle they would develop a “massed” start. Lined up on the field side by side at about 100-foot intervals, the competitors took off about 10 seconds apart. Each cleared a staging pylon which eventually equalized the interval, and like trying to garner a favorable starboard tack for a racing sloop or the famous Formula One starts at Sebring in the sixties when drivers had to dash across pit road, leap into their GT-40s and attempt a stand-still, engine start, these air racers, once they established a position at the first pylon, would create wing tip to wing tip action that wasn’t found anywhere else. Close flying and low altitudes kept the non-flying spectator at the edge of their seats. 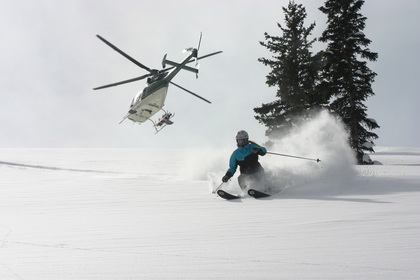 Not Your Ordinary Sortie - Legendary ski film producer Warren Miller was quoted as saying: “In a recent ESPN program, they indicated that with my funny falls and dry-witted narrated ski films, I discovered this athletic film genre.” Indeed, the use of helicopters in some of Miller’s films, and the films of pioneers such as Hans Gmoser, spurned an entire industry of excitement, adventure and beauty.

Through these exciting films, the helicopter pilots, filmmakers and world-class skiers have promoted an adventure discipline unlike any other. You skiers out there know exactly what I am talking about...Being swept up a gentle slope of untracked powder by one of these incredible flying machines is a jaw-dropping experience. The funny thing is, contrary to popular belief, heli-skiing isn’t that tough. You don’t need to be a daredevil on boards to enjoy this one-of-a-kind trip. Whether you are an expert skier or just like to cruise the corduroy of the blue square, you too can jump on board.

Conditions on a heli-ski trip will range from effortless powder to amazing corn snow. Guide forecasting and the mobility of a helicopter enable careful matching of terrain to the current conditions and skier ability. Skiers get carted away from a mid-resort location or isolated backcountry lodge to slope after slope of fresh tracks—sometimes skiing more than 40,000 feet vertical in just under three days. Talented and knowledgeable guides, and high-hour and highly experienced pilots deliver an experience that every outdoor enthusiast should try.